My working environment is pretty basic. I have used MacBook Pros for years, although my first working machine was an amazingly enduring cheap Windows laptop that I picked up on sale at the Office Depot in Beer Sheva. I don't remember now what brand it was, but it lasted for several years, then I sold it and it lasted its new owner for another few years. The next one I got was my first PowerBook, I was able to find a new 2004 model for a very good price. I had used Power Mac servers since 1995, so I've always like Macs. Then when the new MacBook Pros came out, I bought one, and my old PowerBook went to the son of a friend. 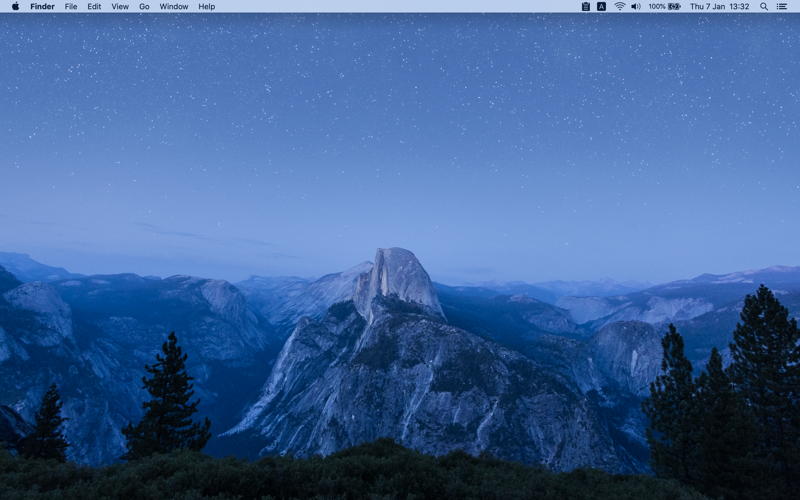 For the next several years I worked at a desk with my MacBook Pro in clamshell mode, hooked up to a 27" monitor and an external keyboard and mouse. I had a small desktop laser printer to one side, and my books on the other side. There was a large whiteboard on the wall above the monitor so I could keep track of what I was doing for whom. The whiteboard is still there, but now the desk has been replaced with a sofa usually covered with sewing and quilting supplies.

With the advent of WiFi, it became possible for me to work in any room I wanted, or even out in my garden or upstairs on the balcony, as long as it was shaded where I was sitting. I still keep a few long RJ45 cables, though, and have adapters to use them with my MacBook Pro if it becomes necessary. Those adapters also came in handy during trips to Europe to give presentations at a few MODXpo meetings. 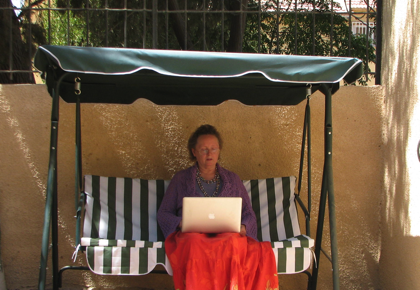 Working with a laptop came in handy one time when some local Bedouin thought it would be a good idea to pull down several miles of cable to sell for scrap. The didn't realize that you can't sell fiber optic cable like they often do with copper telephone cable. The whole south of the country was without internet from Bezeq, the local telcom monopoly. All other ISPs lease their cable access from Bezeq. Fortunately, a nice small web development agency in a neighboring building let me use their TV cable internet access until the phone company got its cable replaced. It was interesting talking to them. They were familiar with MODX and liked it very much, except for one thing. They found that it was too easy for their clients to manage their own sites, causing the agency to lose money. So they didn't use MODX and charged their clients maintenance rates that provide the bulk of their income.

I recently bought a new MacBook Pro, since my old one couldn't run the latest versions of OS X. Now the old one sits across the room connected to my laser printer and serves as my file and print server.

I have used several different web-oriented editing environments, from early versions of DreamWeaver to Eclipse to phpStorm. I even tried RapidWeaver once. phpStorm was really good, but when they went to the yearly subscription basis I wasn't willing to pay that much, since I wasn't doing major websites at the time, and was getting close to retiring from active development anyway.

Then for a while I went back to the beginnings, using BBEdit for code - yes, I was using TextWrangler. I actually registered BBEdit and paid for the premium version since I've used their editor since I got my first mac notebook. Before then, I had used an excellent Windows programming editor called Crimson Editor. Lately I've been using Nova, and so far I like it very well. 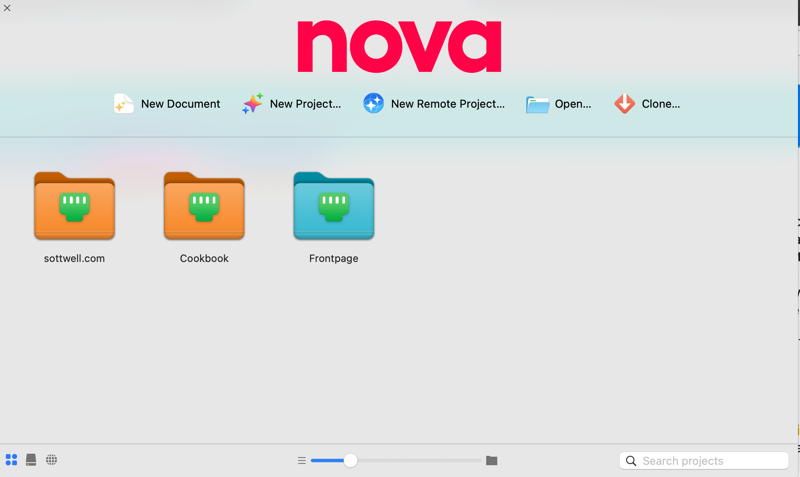 I use Cyberduck for my SFTP connections, or FTP if I happen to be forced to work with a hosting provider that doesn't use SFTP. Of course, I always use SSH logins, with keys for both of my Macs just in case. One thing I really like about CyberDuck, at least on a Mac, is that it only has a remote window. It uses the local Finder windows instead of having its own local filesystem windows. While Nova provides remote servers, there are some things that you just need a full SFTP client for. 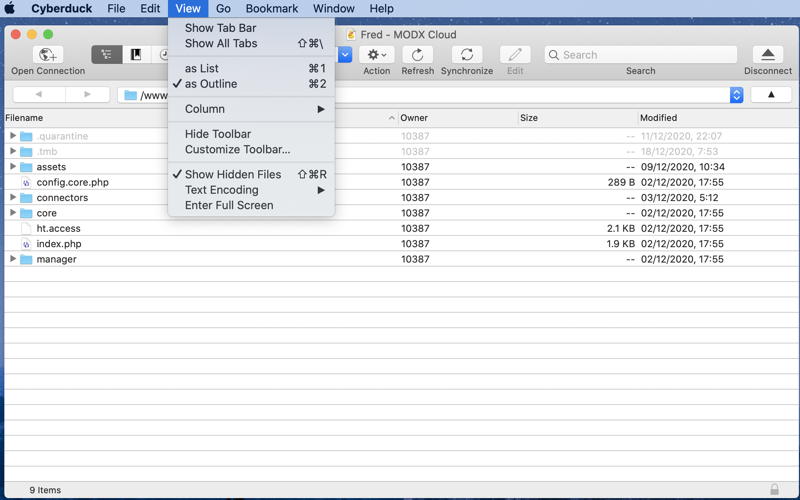 When I was still actively developing, I usually had sshfs installed and connected to the remote filesystems using that. It's actually a lot of fun; the only way you can tell that it's not a local file folder is the time lag in downloading and saving things. I always named the sshfs root folder in all-caps so it would be less likely for me to forget that it was actually a remote file system.

For images, I have used GIMP as well as Pixelmator and Seashore. These are all nice for serious image manipulation and even graphics creation, but I'm no designer. So GraphicConverter has served me well for all of my image processing needs. I mostly use it for resizing images, putting arrows and circles to draw attention to a feature in a screenshot, and to convert almost all images going to a website into JPG format. 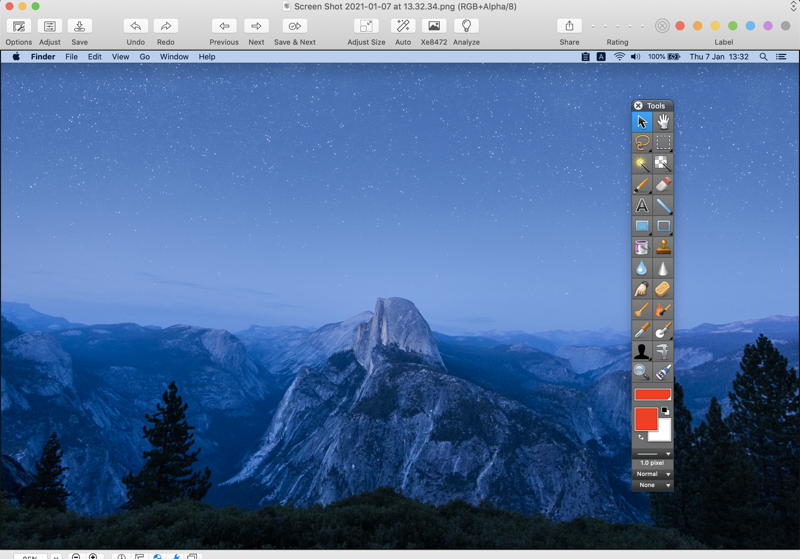 While I have used phpMyAdmin, and still use it for localhost installations, it's much better to have a desktop database client and log in to your remote database via SSH. I use Sequel Pro, which is easy to use and provides all the database functions I could need Yes, it crashes when closing a connection window, but I don't really care since I never have more than one connection opened at a time anyway. Its dock icon is nice, too... mmmm! Pancakes! CyberDuck's yellow rubber duckey is cute too.

And last but far from least, I have the most excellent Solitaire Till Dawn to keep me occupied if I get bored... 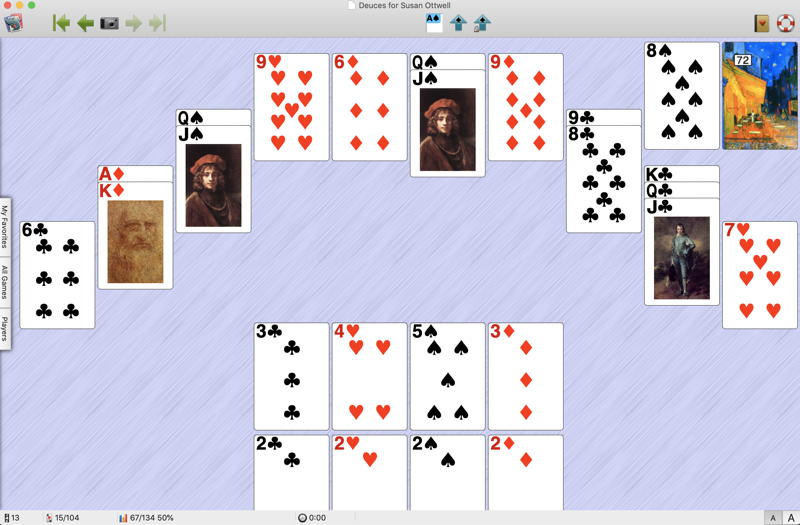