More than 40 years ago I taught my babies how to read from a series of children's books called The Berenstain Bears. They told of the adventures of Papa, Mama, Brother, Sister and Baby Bear. They had picnics, played baseball, rode bicycles and engaged in other family activities. I can still remember how proud my 2-year-old was when he was able to read a whole sentence by himself.

So, 40 years later, I ran across cotton prints featuring the Berenstain Bears at Christa Quilts. And I know just the little girl to love a quilt made out of them. So I ordered a couple of layer-cake packs and some white background yardage, and made a giant pinwheels quilt, from this design - I don't remember where I found the picture, but it looked like a nice bright quilt. 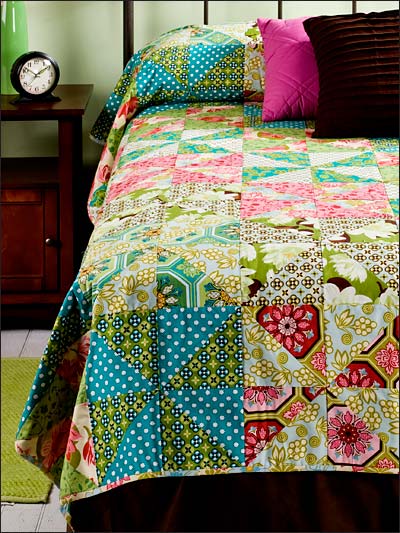 I just used a simple trick for making two half-square triangle blocks at once out of the 10" layer-cake squares, then stitched four of these into pinwheel blocks. There were enough odd print squares left over to make a dark narrow border to set off the white background print wide border. I'm still not sure how I'll bind it, but that can wait until it's quilted.

Finally after sitting for years, the quilt was pinned and ready to go to the machine (as soon as the blue patchwork gets its binding sewn on). 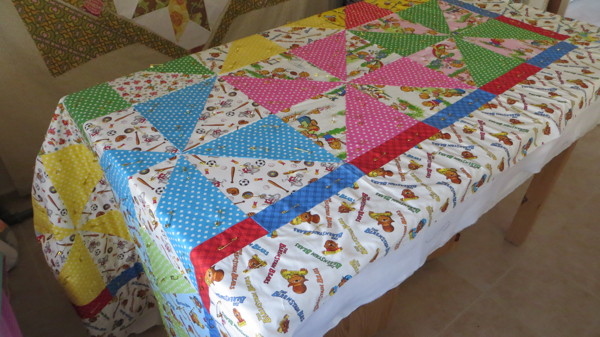 So far I've just used the walking foot to stitch 1/4 inch from each seamline, making a nice-looking grid. That leaves rather large triangles that really need something in the way of free-motion quilting. I decided to quilt the light triangles with simple straight lines, and the border in similar lines in alternating directions.

And at long last, here's the finished quilt. I chose plain turquoise for the binding. Now I can box it up and mail it off to the daughter of a friend in Texas. Well, I can mail it when the post office opens after the Rosh Hashanah holiday, at any rate! 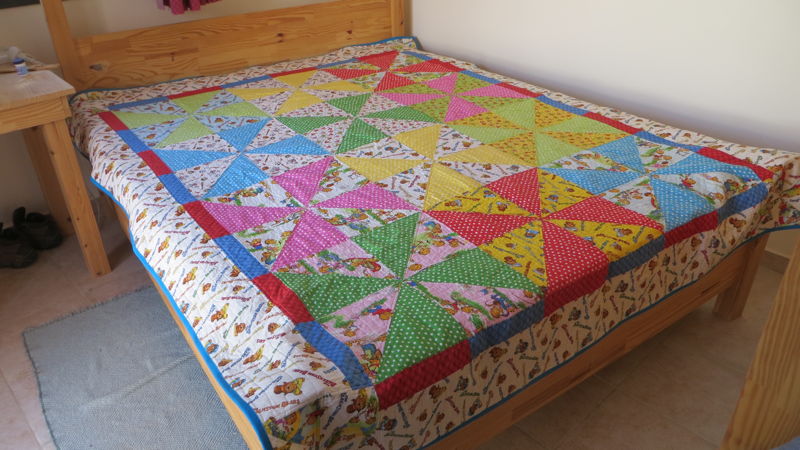